YouTube released its first Brand Channel Leader board earlier this year, featuring channels that have had the most success attracting repeat viewership, shares, and engaged fan bases. But how well are brands actually doing on the video-sharing platform?

According to Touchstorm’s Video Index, only 74 of the top 5,000 channels on YouTube belong to brands. This isa mind-blowing statistic, given the video platform’s millions of daily users and the size of marketing budgets for international brands. These 74 brandsare YouTube innovators, who enjoy one new view every two seconds, with their content being liked and shared by legions of loyal fans.

END_OF_DOCUMENT_TOKEN_TO_BE_REPLACED

With over one billion people using social media channels across the globe, it has become a powerful communications and marketing channel that we cannot afford to ignore.Social networking sites allow for viral marketing and word-of-mouth promotion to be very effective because of the high levels of consumer engagement.

But with so many businesses making use of social media, it’s not enough just to set up an account and post generic items once or twice a week. Social media advertising offers far more potential than that.

END_OF_DOCUMENT_TOKEN_TO_BE_REPLACED 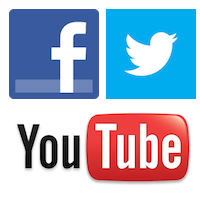 Although brands are increasing their spend on social media advertising, only a relatively small portion of it is going to ads - according to a new survey of Ad Age readers.

Ad Age and RBC Capital Markets jointly conducted their fifth major survey of marketer attitudes toward social media and the survey polled 1,682 executives at marketing, agency and media companies for their opinions on Facebook, Twitter and YouTube (which was included for the first time).

It seems that marketing teams are spending slightly more in digital and social media channels than in previous years, but this spend is still a relatively small part of overall advertising budgets. So what’s the thinking behind it?

END_OF_DOCUMENT_TOKEN_TO_BE_REPLACED

While it makes sense to look at clicks and conversions when it comes to your video advertising campaign on YouTube, you’ll also want to take a look at their Analytics section from time to time. The data they’re providing is based on their understanding of your traffic and its behavior when your video is viewed. Before you put down a chunk of change on an explainer video or hire a spokesperson, you’ll want to have a good handle on how people are consuming your content and how to improve your communication when necessary.